When treated with appropriately designed catalysts, the hydrogen content of such molecules may be released in the form of H2, and ideally whenever and wherever H2 is needed, for example, in hydrogen fuel cells and hydrogen cars. Therefore, the development of catalysts capable of effectively catalyzing the production of H2 from LOHCs is of tremendous energy and environmental ramifications.

Chair Professor Zhiping Zheng’s research team from the Department of Chemistry at the Southern University of Science and Technology (SUSTech) has recently made significant progress toward this goal. Specifically, the researchers succeeded in extending the Noble Prize-winning Grubbs catalysts for the efficient dehydrogenation of LOHCs. Such an application goes beyond their well-established uses for olefin metathesis reactions. Their findings are detailed in a recent series of research articles. It is also the very first ruthenium catalyst demonstrated for this capacity without needing a multidentate and nitrogen-donor ligand. Moreover, the unusual reaction mechanism involving a unique 6-m-r (or 8-m-r) methanol-assisted metathesis pathway, rather than the common metal-ligand cooperation mechanism, was proposed for the Grubbs catalysts without a non-innocent ligand based on combined mechanistic and systematic DFT studies in collaboration with Prof. Lung Wa Chung’s team.

The second paper, entitled “Hydrogen Production via Aqueous-Phase Reforming of Ethanol Catalyzed by Ruthenium Alkylidene Complexes,” was recently published in Organometallics. A series of ruthenium alkylidene complexes were tested for aqueous-phase reforming of ethanol at readily achievable temperatures (< 100 °C) (Figure 2).

The best result was obtained using Grubbs catalyst M207, producing a maximum turnover number (TON) of 47,295 with a five-day reaction, ranked as the second-largest known for homogeneously catalyzed ethanol dehydrogenation. Kinetic experiments confirmed that the reforming process undergoes a second-order kinetics reaction, with both ethanol and water contributing to H2 production.

Qian Wang, a joint Ph.D. student of SUSTech and the Harbin Institute of Technology, is the first author of this paper. Research Assistant Prof. Lei Qin and Prof. Zhiping Zheng are the co-corresponding authors.

The best result was achieved with the use of the first-generation Hoveyda-Grubbs catalyst. Notably, the hydrogen generation reaction is highly pH-dependent, stemming from the transformation of divergent rate-limiting steps under different conditions.  A detailed reaction mechanism was proposed based on the 1H NMR and the high-resolution mass spectroscopy data. 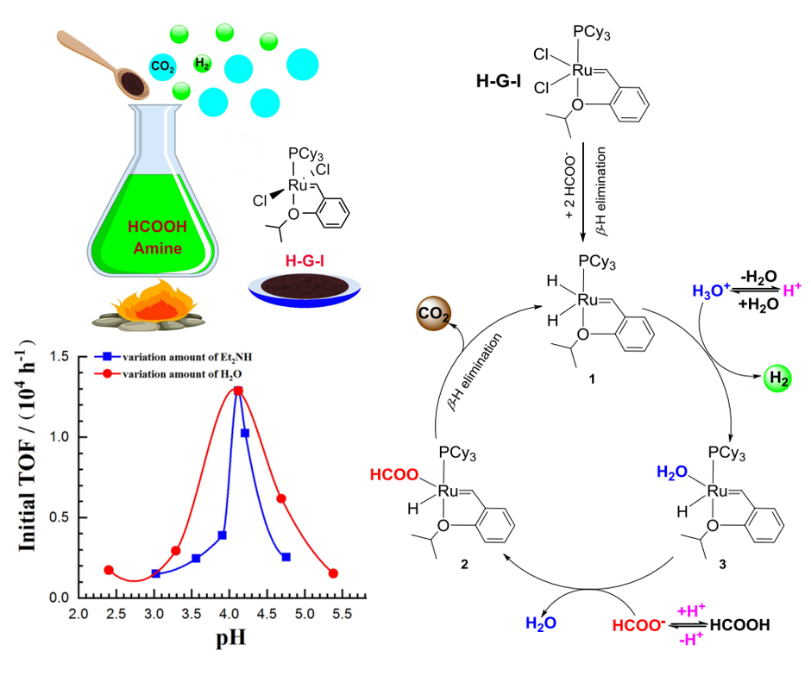 Qian Wang is the first author of this paper. Research Assistant Prof. Lei Qin and Prof. Zhiping Zheng are the co-corresponding authors.

Paper links (In order of appearance above):